Oceanfront properties are rare in and of themselves. And when more than 13 acres of Southern California oceanfront hits the market? Well, it naturally garners headlines.

Casa Paloma, as the property is named, is a sprawling oceanfront compound majestically perched along approximately 400 feet of Pacific oceanfront. The one-of-a-kind offering has been listed for $33,950,000 by Sally Hanseth, a Coldwell Banker Global Luxury Property Specialist affiliated with the Montecito office of Coldwell Banker Realty, and Dusty Baker of The Dusty Baker Group in Santa Barbara. 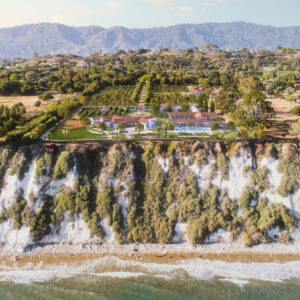 “When the current owner purchased this property, it hadn’t changed hands for more than 60 years, presenting a once-in-a-lifetime opportunity to secure one of the rare, large bluff-top parcels in Santa Barbara’s prestigious and private Hope Ranch community,” said Hanseth. “Casa Paloma offers an awe-inspiring front row seat to the Pacific Ocean, where on most days you can see whales, dolphins and sea lions from the property, as well as the Channel Islands and Santa Ynez mountains. It completely redefines the modern-day compound as a secluded and sophisticated live, work and play retreat.”

Set behind a gate that opens to a road stretching several acres and bordered by orchards on each side, Casa Paloma gives the illusion of being secluded in privacy thousands of miles away, yet located only minutes from the heart of Santa Barbara and the city’s private airport and luxury amenities.

Included in this legacy waterfront offering is an approved design by the award-winning Tom Meaney Architects. Currently in mid-construction, the 5-bedroom main residence has been envisioned as an Andalusian Spanish farmhouse. A grand fountain makes the initial introduction to the home, which encompasses a contemporary-style floor plan with a harmonious flow between living and entertaining spaces indoors and out. In addition, the plans include a three-bedroom guesthouse, resort-style pool and cabana, tennis court, tennis pavilion, eight-car showcase garage with office and half bathroom, horse facility, an approximately 720-square-foot accessory structure “she shed,” organic vegetable garden, animal pens and organic orchards of avocado and lemon trees.

“Every conceivable luxury has been thoughtfully integrated into the conception of Casa Paloma while still offering the future homeowner unmatched freedom to customize the home according to lifestyle and tastes,” said Hanseth. “Casa Paloma represents the ultimate California dream—a chance to live surrounded by abundant beauty and nature in one of the most desirable waterfront locations in the world.”

How to Nail Mismatched Bridesmaid Look